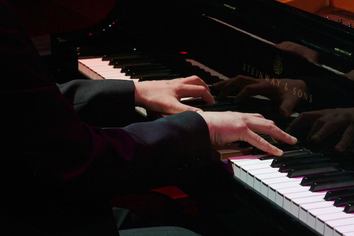 Jazz Concert for All Ages

Never forgetting his La Crosse, Wisconsin roots Dave makes annual appearances in the region. During his visits he often conducts workshop for young musicians in local schools and universities. His performance with La Crosse Jazz Quartet members on the Viterbo Fine Arts Main Stage has become a much-anticipated annual event.

Dr. Greg Balfany is a prominent woodwind artist and band leader in Western Wisconsin. He performs extensively with various jazz groups, rock bands, the La Crosse Symphony, Viterbo opera and other ensembles. Greg directs the La Crosse Jazz Orchestra, the regions only repertory jazz orchestra. He and his jazz groups have been recognized as number one in the region by all the reader polls for the past few decades. He has performed with and directed many jazz luminaries including Kurt Elling, Randy Brecker, Clark Terry and others. Greg is Emeritus Professor of Music from UW-La Crosse and lives in La Crosse with his wife Martha.

Karyn K. Quinn has a 40-year career in the world of music! Karyn is in demand as a bassist throughout the Midwest and has performed in concerts with Kurt Elling, Wycliffe Gordon, Byron Stripling, Delfeayo Marsalis, Evan Christopher, and Eric Alexander among many others.

Karyn lives in La Crosse, WI and can be heard performing regularly with the La Crosse Jazz Orchestra, Safe Passage Jazz Quartet, The 3rd Relation Jazz Quartet and the La Crosse Symphony Orchestra. When not performing in those groups she is busy freelancing in the recording studio, musical theatre pit orchestras and with various bands.

Karyn has a M.M. Degree in Bass Performance and Jazz Pedagogy from the University of Northern Colorado and a B.S. in Music Education. She was on the faculty at The University of Wisconsin – La Crosse from 1989 – 2017 where she directed the award – winning jazz ensembles, taught both double bass and electric bass as well as courses in Jazz History, Improvisation and Music Theory.

Karyn was awarded National Endowment for the Arts Fellowship to study with bassist, Rufus Reid and has also performed in master classes for Gary Karr. She is an active member of The International Society of Bassists and her method books for beginning electric bass students, Bass Sessions, are published by the Neil A. Kjos Music Company.

Rich MacDonald is the director of jazz and percussion studies at Winona State University in Winona, MN – a position he has held since 1996. A native of Port Huron, Michigan, Dr. MacDonald was heavily influenced by Motown and rock music in the 1960’s emanating from nearby Detroit. While attending college at the University of North Texas in the late 1970’s, he was introduced to the classic jazz of Charlie Parker, Dizzy Gillespie, Miles Davis and John Coltrane; modern groups led by Chick Corea, Keith Jarrettand Pat Metheny; and a wide range of big band music. These influences
continue to inform his playing today, as a drummer and vibraphonist, performing at jazz venues in the tri-state region of Minnesota, Wisconsin and Iowa. He is also principal percussionist with the La Crosse (Wisconsin) Symphony Orchestra.

As a drumset and percussion specialist, Dr. MacDonald has presented clinics throughout the U.S. and Canada. He is an endorsee of Sabian cymbals and Vic Firth sticks and mallets, serving on their respective
education teams. Some of Dr. MacDonald’s performance credits include: George Benson, Eddie Daniels, Slide Hampton, Milt Hinton, Arturo Sandoval, and three years touring experience with Ice Capades. Dr. MacDonald earned his Bachelor of Music (BM) degree in Jazz Studies and his Master of Music (MME) in Music Education from the University of North Texas. His Doctorate (DA) is in Percussion Performance and Pedagogy from the University of Northern Colorado.